The best bike brake for your application purpose

First of all, the decision should be made on the basis whether you are looking for an MTB brake or a road bike brake. Furthermore, the brake types are then distinguished by their funcitonality, namely whether they work hydraulically or mechanically.
Hydraulic brakes offer a better performance and a higher braking force at relatively small exertion of force at the lever. Mechanic brakes are less susceptible (sturdier) to damage than hydraulic ones but offer less braking force. Some force is lost due to the friction of the braking cable within the sleeve. Cyclocrossers and inexpensive mountain bikes often use mechanic disc brakes. Hydraulic brakes are not only more expensive to purchase but servicing them, e.g. bleeding costs quite much and takes time.

Let's give you a short overview over the different variants which are available in regard to the subject of the bike brakes.

The bike brake per se: The disc brake 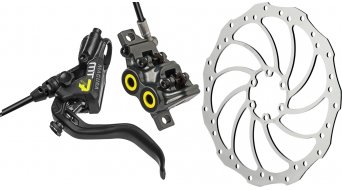 Disc brakes on the MTB
The braking system per se for mountain bikes. Due to the disc rotor they are also called disc brakes. Apart from the more known hydraulic disc brakes which work with braking fluid, there are still the mechanic disc brakes, which are only seldomly used nowadays. The advantages of the disc brake on the MTB cannot be talked down into something insignificant: Low weight, enormous braking force and good modulation! The rotor plays a vital role. The diameter of the brake rotor should be chosen correctly, it is dependent on the rider's weight and on the area of application. If you choose a rotor which is too small, you run the risk of overheating the brakes way too fast. The disc brake installation and its adjustment can also be easily handled. Most of the brake calipers offer a simple post-mount installation during which the caliper is adjusted by means of slots in order to avoid a dragging of the brake. The suitable selection of disc brakes on the MTB: 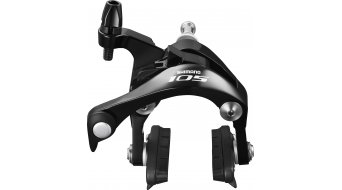 As to the rim brake on the MTB, the trend is quite clear. Canti-brakes and V-brakes are being pushed asidea a little by today's disc brakes. But for purposes which are not all too wild, rim brakes on the mountain bike or trekking bike are sufficient without any problem, and compared to disc brakes, they can be purchased at a much lower prices. In use with mountain bikes, we have to distinguish again between the Canti brakes (Cantilever), which are a little outdated, and the V-brakes. Cantilever brakes are being used again on cyclocrossers since they are compatible with the road bike levers. But the more widely used V-brakes, which are still found on MTB and trekking bikes nowadays, have the better braking force. As long as you are not a friend of more extreme downhill passages, there is nothing wrong with them. The fitting selection of rim brakes:

Not to forget, there also are hydraulic rim brakes, available as MTB as well as road bike rim brakes , although you'll not see them very often on road bikes. They are praised for their great modulation of braking force, and that mainly at bad weather conditions involving wetness.

You'll find more details in the respective named categories. Whether road bike or mountain bike brake, in our online shop you'll find the brake which fits to you and your bike at favourable prices, that goes without saying!

DOT is a very thin hydraulic fluid on polyglycol base. It often is erroneously called brake oil or DOT oil, but from the chemical point of view, it is not an oil compound. The boiling point of this fluid is extremely high and at the often used DOT 5.1 it amounts to about 260°C. The disadvantage of DOT is the characteristic that it connects well with water and thus is hygroscopic. That is why brakes with DOT-fluid "draw" water, which considerably reduces the boiling point. Therefore, we recommend a yearly oil exchange in order to guarantee the safety and an optimal functionality. Mineral oil is a fluid from fossil raw materials. It is not hygroscopic and has a boiling point of approximately 190°C.
!!ATTENTION!! Under no circumstances may DOT and mineral oil be mixed since they have different properties and can attack seals and lines and thus endanger the safety and functionality of your brake.
Which manufacturer uses which oil

It is roughly distinguished between organic and metallic (sintered) pads. As the names already tell, the organic friction surfaces are of organic materials and the sintered friction surfaces are of metallic compounds.
Organic pads preserve the brake rotors a little more than metallic, but they are more susceptible to high temperatures. Metallic pads can stand higher temperatures and are being used for MTB and extreme purposes. They work better at higher temperatures and in total last a little longer.

If you click the „Decline“ button, we will only store the technically necessary and therefore indispensable cookies on your device and retrieve them from your device. However, some content will then not be available - for example, product videos that we host on YouTube and that cannot be integrated without cookies.
Please note that technically necessary cookies must be set in order to ensure the operation of the websites.